With agriculture covering about 40% of Earth’s terrestrial surface, what we grow for humans and animals to eat, as well as and how and where we produce food has cascading effects of critical importance for the environment and human well-being. Addressing the grand challenges of increasing food production and accessibility to a growing global population while reducing agriculture’s environmental impacts requires a systems-based research approach that recognizes the complex relationships among producers, processors, distributors, and consumers.   At Colorado State University, the Sustainable Food Systems Team, based at the School of Global Environmental Sustainability, works to bring together researchers from diverse disciplines to reach for innovative food systems solutions. 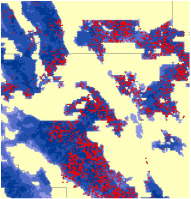 Although rodenticides are increasingly regulated, they nonetheless cause poisonings in many non-target wildlife species.  Second-generation anticoagualant rodenticide use is common in agricultural and residential lands.  Here, we use an individual-based population model to assess the probable effects of rodenticide poisoning on the endangered San Joaquin kit fox.  We find that 36% of the modeled foxes become exposed, resulting in a 7-18% decline in the range-wide kit fox population that can be linked to rodenticide use.  Exposure of kit foxes in low-density urban areas accounted for 70% of the population-wide impact of the rodenticides.  We conclude that the impacts of pesticide applications to non-target kit foxes could be greatly reduced by preventing the use of second-generation anticoagulant rodenticides in low-density developed areas near vulnerable populations.

Link to poster from 2014 SCB conference

Conservation of Shrub-steppe Under Climate Change in Douglas County, Washington

This report focuses on where sagebrush steppe is most likely to persist, and how those areas relate to areas important for conservation or for grazing.  We also discuss areas where restoration might be possible.  We present data on projected future vegetation from several modeling efforts, including both climatic niche models and mechanistic models.  On balance, fewer than half of the models we considered predict continued sagebrush presence in the majority of the county, with a range of 0 – 72% model agreement across the entire county.  Therefore, without active management to promote sagebrush, much of the county may transition from sagebrush steppe to other vegetation types.

Biofuels and Biodiversity in California 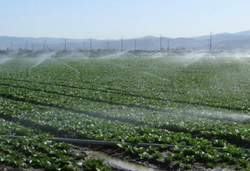 With UCSB's Biogeography Lab California’s modest demand for biofuel is expected to drastically increase with the implementation of recently approved state policies.  The Governor’s Executive Order S-06-06 sets goals for increasing reliance on in-state production of biofuels, specifically that California should produce at least 20 percent of the biofuels consumed in the state by 2010, 40 percent by 2020, and 75 percent by 2050. Hundreds of thousands of acres would need to be dedicated to produce biofuel feedstocks to meet even the short-term goal for 2010 at the low blend rates for both ethanol and biodiesel. Land requirements would increase to millions of acres by 2050 for all blend rates.  Nearly half of the terrestrial vertebrate species in California utilize the state’s agricultural lands, particularly those species with greater dispersal ability. Converting from current crops to some biofuel crops could reduce existing habitat impacts to the benefit of some species of concern, or could cause further degradation of habitat. The habitat factors most likely to be altered include change in vegetation structure, water usage, pesticides, invasive species, and timing or method of cultivation and harvesting (such as whether corn stover is harvested for cellulose or tilled under to fertilize and stabilize the soil). For this project we will conduct a statewide study of the potential effects on habitat of wildlife species associated with changes in crops, crop patterns, and agricultural practices under several scenarios of biofuels production.  (Stoms et al 2012; Dissertation Chapter 1)

Maximising return on conservation investment in the conterminous USA 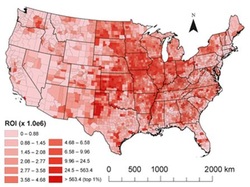 Efficient conservation planning requires knowledge about conservation targets, threats to those targets, costs of conservation and the marginal return to additional conservation efforts. Systematic conservation planning typically only takes a small piece of this complex puzzle into account. Here, we use a return-on-investment (ROI) approach to prioritise lands for conservation at the county level in the conterminous USA. Our approach accounts for species richness, county area, the proportion of species' ranges already protected, the threat of land conversion and land costs. Areas selected by a complementarity-based greedy heuristic using our full ROI approach provided greater averted species losses per dollar spent compared with areas selected by heuristics accounting for richness alone or richness and cost, and avoided acquiring lands not threatened with conversion. In contrast to traditional prioritisation approaches, our results highlight conservation bargains, opportunities to avert the threat of development and places where conservation efforts are currently lacking (Withey et al 2012). This work was featured as the Editor's Choice in Science.

Demographic heterogeneity -- variation among individuals in survival and reproduction -- is ubiquitous in natural populations. Structured population models address heterogeneity due to age, size, or major developmental stages. However, other important sources of demographic heterogeneity such as genetic variation, spatial heterogeneity in the environment, maternal effects, and differential exposure to stressors, are often not easily measured and hence are modeled as stochasticity. Here we demonstrate a previously unrecognized effect: heterogeneous survival in long-lived species can increase the long-term growth rate in populations of any size. We illustrate this result using simple models in which each individual's annual survival rate is independent of age, but survival may differ among individuals within a cohort. We show that, when placed in a population model with overlapping generations, this heterogeneity also causes the asymptotic population growth rate to increase, relative to a homogeneous population with the same mean survival rate at birth. The increase occurs because, even integrating over all the cohorts in the population, the population becomes increasingly dominated by the more robust individuals. The growth rate increases monotonically with the variance in survival rates, and the effect can be substantial, easily doubling the growth rate of slow-growing populations.  These effects of demographic heterogeneity on {lower case lambda} have important implications for population dynamics, population viability analysis, and evolution. (Kendall et al 2011)